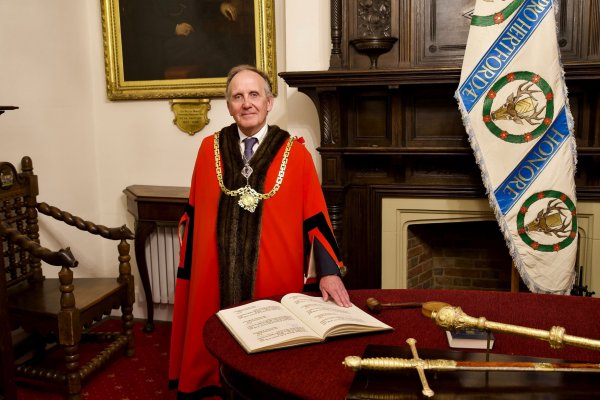 28 May
By: Hertford Town Council

The Town Council via Zoom on Thursday is pleased to announce that Councillor Bob Deering was elected as the new Mayor of Hertford for the Civic Year 2020/21 at the Annual Meeting of the Council, held 22nd May 2020.

For the first time, the meeting was live streamed. If you missed it, you can view it on Hertford Town Council's YouTube page.

Cllr. Deering has been a resident in and about Hertford for a long time and was elected to the Town Council in 2015. He is also a Councillor for East Herts District Council and Hertfordshire County Council.

Cllr. Deering’s chosen charities for the year are the Samaritans and Isabel Hospice.

Councillor Miss Jane Sartin was elected Deputy Mayor for 2020/21. Jane has given enormous service to Hertford and was herself Mayor in 2012.

Cllr. Deering said: “Hertford is a special place and I am enormously honoured to be the Mayor for the forthcoming year. These are exceptional times. My year as Mayor will be very different from all those in the more than 400 Mayoral years that precede me. I became a Councillor to give something back and I will do my best to work for the best interests of every citizen of Hertford.”