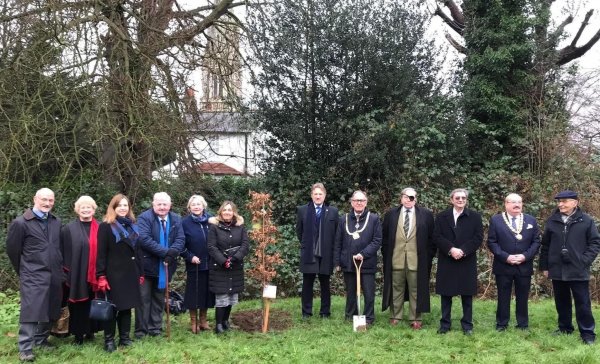 Two native oak trees were planted at Hertford Castle on Sunday 16th January 2022 as part of a nationwide campaign to mark the 80th anniversary of the Association of Jewish Refugees (AJR) - the national charity providing social and welfare services to Holocaust refugees and survivors in the UK. The planting of the trees coincides with Tu B’Shevat the Jewish New Year for Trees.

80 Trees for 80 Years will see native oak trees planted around Britain in honour of people and places that symbolise the enormous contribution made to every walk of British life by refugees who escaped from Nazi Europe.

We were honoured to be joined by the Lord Lieutenant of Hertfordshire, Mr Robert Voss CBE CStJ representing the Queen, and members of the Welwyn Garden City Hebrew Congregation and sponsors of the trees, Mr Peter Briess and Mr Steven Frank who shared their very moving personal stories of the atrocities of the Holocaust. The Mayor of Hertford, Bob Deering, and the Chairman of East Herts District Council were also in attendance.

“As well as helping to mark the heritage of our members and a place of historic interest associated with them, the planting of this tree enables the AJR to give back to and create a living legacy within the country that became home to the Jewish refugees,”

“Britain’s native oak trees are in decline and new trees are desperately needed. We hope these 80 special trees will be appreciated by future generations and provide natural habitats for other native species for many decades to come.”

“It was a great honour and privilege to assist in the planting of more of the 80 trees being planted by AJR around the country and I am delighted that a number are being planted here in Hertfordshire. I am delighted that these have been included in the wonderful legacy for Her Majesty’s Platinum Jubilee as part of The Queen’s Green Canopy. It is very poignant to see the link between Jewish refugees who arrived here during the Holocaust like Steven and Peter (and my own parents) and Her Majesty The Queen who has welcomed and acknowledged the important contribution to British society and culture that Jewish refugees have made over the last 80 years.”

“It was indeed a great honour to assist in the planting of these oak trees at Hertford Castle. They will act as a platform for telling the story of Britain welcoming Jewish refugees and celebrating their great contribution to British life. This will also form part of The Queen’s Green Canopy- the unique tree planting initiative which will mark Her Majesty’s Platinum Jubilee in 2022, whose organisers have adopted the AJR’s project as a “wonderful initiative”.

The trees at Hertford Castle will act as a platform for telling the story of Britain’s Jewish refugees and celebrating their remarkable contribution to British life. It will also form part of The Queen’s Green Canopy - the unique tree planting initiative which will mark Her Majesty’s Platinum Jubilee in 2022, whose organisers have adopted the AJR’s project as a “wonderful initiative”.