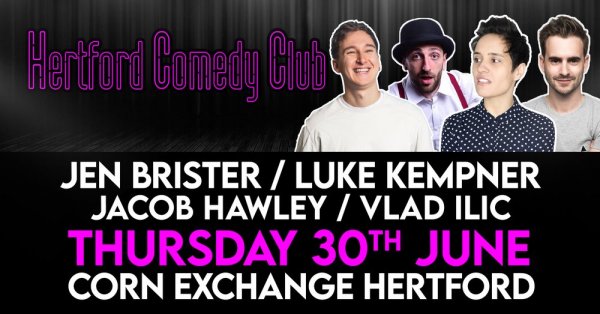 Mock the Week regular Jen Brister is a critically acclaimed stand-up comedian who has been seen on BBC’s Live at the Apollo, Frankie Boyle’s New World Order and on Hypothetical and Sara Pascoe’s comedy Lectures on Dave.

She is a regular performer on the UK and international comedy circuits and has written and performed on BBC Radio 4’s The News Quiz, The Now Show and presented for BBC 6 Music.

Star of Spitting Image, Steph’s Packed Lunch and with over 10 million views of his online videos, Luke Kempner is one of the UK’s hottest mimics and stand-up comics. With a hilariously razor sharp roster of contemporary impressions, Luke has quickly become a household name.

After reaching the finals of the BBC New Comedy Award and appearing on The Russell Howard Hour (Sky), Jacob Hawley has become a critically acclaimed new voice in comedy.

Vlad Illic is an up-and-coming comic from Macedonia who’s been working tirelessly on the London circuit for the past four years, winning an award for each year he’s been performing.

From winning the notorious King of the Gong award at the Comedy Store, up to the most recent One to Watch  at the well-established club Up the Creek, he has earned the reputation of an outstanding stand-up.

Vlad has recently appeared on both BBC Three and BBC One

This show is not to be missed!

Strictly over 18s only.

Line up subject to change